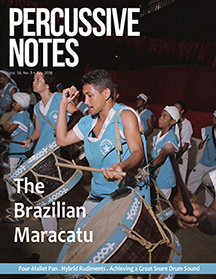 The book uses upper case “R” and “L” to specify the hand motions and lower case “r” and “l” for the feet. The direction of the patterns is notated using arrows. For example, an arrow preceded by an “R” and followed by an “L” means that the right hand will initiate the motion, while the left hand follows. Limbs played in unison are notated with two letters. For example, “Rr” indicates the right hand and right foot played in unison.

This is an extensive study of four-limb coordination. Those who are looking for an analytical, methodical approach to independence will find this book especially interesting.